Liviko chosen as the most competitive food industry company 15.10.2020

“As a successful company, we know that strength in foreign markets translates into better competitiveness in the domestic market. Our Vana Tallinn liqueur and Crafter’s gins compete with other top global brands on 60 different markets. Such intense competition ensures that Liviko’s production is constantly developing, and its brands are in top condition. Liviko’s short chain of command, enabling us to react directly to market changes and be more personal in partnerships, has definitely been among our competitive advantages,” said Janek Kalvi, Chairman of the Management Board at Liviko AS.

“Liviko AS is a worthy recipient of the title most competitive food industry company in 2020. They have worked hard to access foreign markets where Estonian companies have not yet been with their brands on such a scale. It’s great to see that they have reached more than 60 countries worldwide, and a big part of being competitive in foreign markets is being successful and competitive at home, which Liviko has proven to be. Its also the first time Liviko has won this particular title, which shows even more how much work has been done and how big of an achievement it is,” said Mait Palts the director-general of The Estonian Chamber of Commerce. Liviko was also one of the founding members of The Estonian Chamber of Commerce in 1925 and continues to be an active member of the chamber, with a clear goal to develop entrepreneurship and business climate in Estonia.

“Winners of the competitiveness ranking are serious and successful Estonian companies; their financial management is kept in good order and the employees are paid motivating salaries. Behind the good results are years of dedicated work and they know how to appreciate their customers and cooperation partners. Furthermore, they are able to respond quickly to changes on the market and are innovative,” said Marje Josing, Director of the Estonian Institute of Economic Research and added, “One flash of success is not enough to win in the Competitiveness Ranking, a company needs to be strong in many areas and such a result is achieved with continuous and constant good work.”

Every year, the Estonian Chamber of Commerce and Industry recognises through the Competitiveness Ranking companies that have achieved the best rankings in terms of their activity in various fields. There were 1,418 participating companies in this year’s competition, and the best in thirteen areas of activity were recognised. In the food industry 41 Estonian companies participated. The Estonian Companies’ Competitiveness Ranking dates from 2003.

The Estonian Institute of Economic Research (EKI) helps with the technical calculations and drawing up the rankings, in cooperation with the Lausanne International Institute for Management Development. The Competitiveness Ranking highlights companies who wish to participate, meet the requirements set out in the methodology and present the necessary statistical data for the last two years of economic activities: sales revenue, net profit, labour costs, equity capital and yearly average number of employees. Furthermore, based on the data submitted by the companies, EKI calculates various important indicators: changes in sales revenue and changes in profit compared to the previous year, return on equity, monthly average labour cost per employee during the reporting year, annual productivity per employee, created added value (in this methodology: profit + labour cost).

Established in 1898, Liviko AS is a rapidly developing international group specialising in premium alcohol, selling its own products on 60 markets and representing the world’s leading premium brands in the Baltic countries. The production facility and head office of Liviko AS are located in Tallinn, with branch offices in Riga and Vilnius. Liviko AS is one of the three largest alcohol companies in the Baltics, paying equal attention to the export and import of alcoholic beverages in addition to production. Liviko Group AS employs 270 people.

AS Liviko Chairman of the management board (on the left) and The Estonian Chamber of Commerce and Industry Director General (on the right). 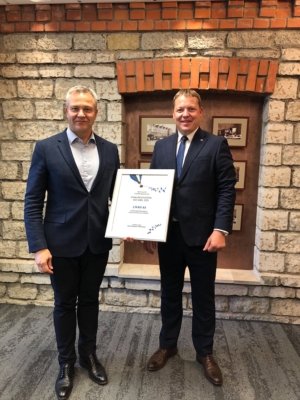