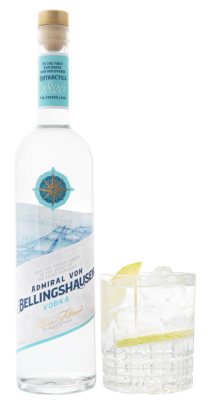 In celebration of the 200th anniversary of the discovery of Antarctica, AS Liviko launches Admiral von Bellingshausen Vodka, dedicated to the people who first discovered the ice continent.

“Admiral von Bellingshausen and his extraordinary story of discovering the Antarctica inspire people even today. This vodka, created by the craftsmen of Liviko, is a tribute to the life’s work of Estonian-born Admiral von Bellingshausen and to celebrate the 200th anniversary of the discovery of Antarctica. Bellingshausen Vodka is an outstanding representation of Liviko’s 120 years of experience in vodka production, where knowledge and skills have been passed from generation to generation and craftsman to craftsman,” said Mr Janek Kalvi, the CEO of AS Liviko.

This vodka, dedicated to the Estonian-born explorer and seafarer Admiral von Bellingshausen, is made using the triple cascade flirtation and according to the recipe developed by the craftsmen of Liviko. First, active coal filter is used to give the vodka special purity. After that, water used for making the vodka as well as the spirit are filtered through a system of silver filters, consisting of 29 silver elements. The polishing filter gives Bellingshausen Vodka its exceptional finish and brilliant shine.

Liviko is a supporter of the voyage of Thetis Expeditions and the Estonian Maritime Museum to Antarctica.